When Disinformation Targets Companies: The Case of #BoycottOliveGarden

False information can spread faster than the truth on social media, and more and more, companies are feeling the impact of that reality. In early August, a handful of Twitter accounts began tweeting lists of companies it claimed supported President Trump’s re-election campaign and called for a boycott against them. One of the accounts (@maryruthedk) even tweeted the list in response to a Washington Post article that debunked the claims. One post from an account claiming to be a dual US and Swedish citizen living in New York (@DemocraticSurge) received more than 15,000 retweets and 17,200 likes.

As with most viral content, the list appeared to be short-lived, receiving only a few tweets during the next few weeks. That is, until 25 August at 9:24 AM when The Olive Garden became the new target. A Twitter account belonging to an English professor tweeted: “Olive Garden is funding Trump’s re-election in 2020. It would be terrible if you shared this and Olive Garden lost business.” It was a false claim. Twitter users immediately responded with the hashtag #BoycottOliveGarden and the post went viral. 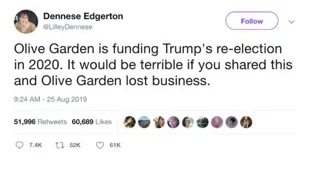 Between the original post and 26 August, #BoycottOliveGarden received more than 52,500 mentions (including tweets, quote tweets, and re-tweets) on Twitter by 48,700 users. In just two days, the hashtag had a reach of 139.4 million and 169.4 million impressions.

The viral post went the way most politically sensitive viral content goes these days. Liberal-leaning accounts amplified the tweet primarily through re-tweets and quote-tweets, encouraging the boycott. When it began to trend, accounts belonging to people who lean conservative responded in support of The Olive Garden and against the boycott. A small group of scam and spam accounts looking to attract followers jumped on the hashtag as it was going viral, thereby amplifying the post.

At 1:57 PM on 26 August, the original poster tweeted that her account had been hacked and that the hacker was the one who tweeted the false information. She deleted the original tweet and tried to set the record straight, but by then it was too late. The Olive Garden Twitter account spent the day setting the record straight and responding to as many posts as possible to refute the claim, but Twitter accounts continue to share the false claim.

Social media is increasingly becoming the battle space for information operations, whether it is conducted by foreign actors as part of a broader campaign or a hoaxter looking to cause trouble. While the virality of a false post like this might be temporary, the damage to a company’s reputation and bottom line can be lasting.